Circulatory system diseases are the leading cause of death in the Republic of Croatia. This group of diseases includes sudden cardiac arrest, which due to heart beat dysfunction leads to immediate loss of heart function and consequent blood flow to the brain and other organs, resulting in sudden cardiac death. According to the data of the Croatian Cardiology Society, 9000 people, or one person an hour, die annually of sudden cardiac arrest in Croatia. It is extremely important to emphasize that rapid intervention of witnesses in case of sudden cardiac arrest can significantly reduce the mortality rate. With no rapid eyewitness intervention, the survival rate for sudden cardiac arrest is less than 10 percent, while intervention within three to five minutes from the moment of heart failure increases the survival rate to more than 50 percent. Therefore, knowledge of CPR and the use of automatic external defibrillator (AED) is extremely important. Lay people without medical knowledge can also provide help to someone who has experienced a sudden cardiac arrest and thus save their life in the fateful minutes until the arrival of emergency medical service. The AED device is easy to handle, it evaluates the heart rate, and gives instructions in Croatian for further treatment (deliver electric shock or no).

The Croatian Institute of Emergency Medicine (CIEM) monitors the implementation of the National programme of publicly available early defibrillation "Start a Heart - Save a Life". The CIEM also keeps a register of AED devices that are included in the programme of publicly available early defibrillation in Croatia, and their locations can be found in the AED device network.

Leaflet: Start a Heart - Save a Life 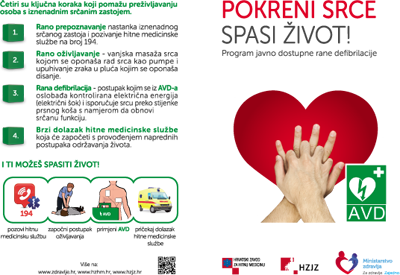 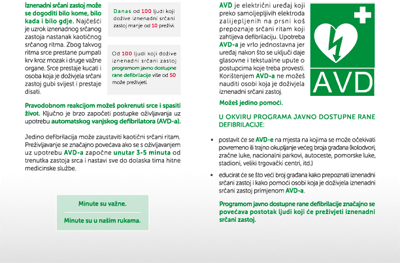 Poster: Start a Heart - Save a Life 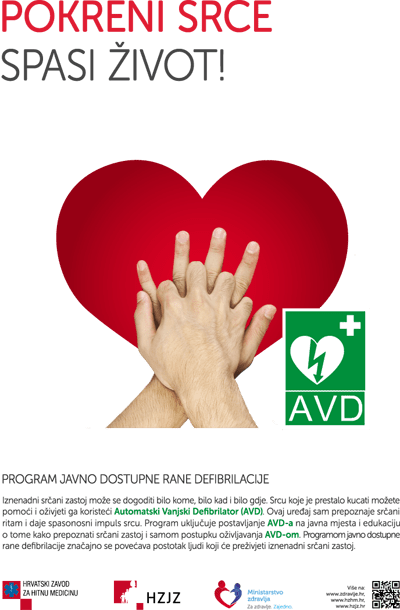 Continuing education of nurses in the emeregency departments